Facility operators and owners must address ADA compliance to accommodate people with disabilities—but did you know there are days, weeks, and months to raise awareness of various disabilities and related matters? One is International Day of People with Disabilities on December 3rd, and, with about 15% of the world’s population living with disabilities, it makes […]

In the past, people with disabilities weren’t always accepted into society. It wasn’t until the 20th century that the physically and mentally disabled gained support. In the 1930s, the League for the Physically Handicapped was formed, helping to fight for employment rights during the Great Depression. Over the next few decades, advocacy groups and legislation […] 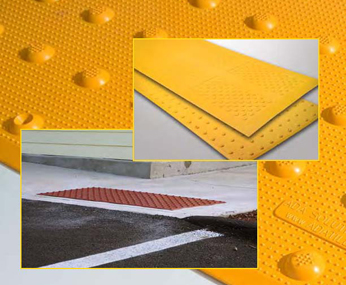 Surface applied tactile tiles are often used in transit applications such as commuter rail, subways, light rapid transit, monorails, and bus stations. They have emerged as a requirement for public transportation facilities under Title II of the American’s with Disabilities Act (ADA), which forbids public transportation authorities from discriminating against people with disabilities. Tactile warning […]

Passed in 1990, the Americans with Disabilities Act (ADA) was revised later with the 2010 ADA Standards for Accessible Design. It was originally intended to reduce discrimination. In these guidelines, we will discuss ADA-compliance requirements for accessibility in public spaces. Two components of the ADA apply to businesses, including: Title I: Covers qualified employers with […]

Lawsuits filed against large businesses and local governments regarding failures in ADA compliance have become commonplace, leading to settlements in the billions of dollars that require major renovations and repairs. The Americans with Disabilities Act requires cities and businesses to install equipment and design spaces that ensure meaningful access for those who are disabled. While […]