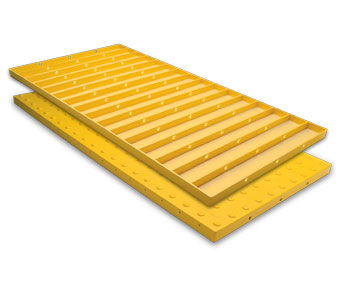 Most businesses are required by law to follow the guidelines of the Americans with Disabilities Act (ADA). This important piece of legislation, first enforced in 1991 and amended over the years, mainly focuses on businesses that serve the public. It requires them to provide equal opportunity to individuals with disabilities, especially regarding access. There are five segments called titles that provide guidance as to which businesses must be ADA-compliant.

Here is a closer look at the most relevant ones:

Those exempt from the law include private religious organizations and clubs, but there are many commercial facilities that aren’t included either. If a warehouse, office building, or factory doesn’t provide goods or services directly to the public, it only needs to meet ADA requirements if it undergoes alterations or is being newly constructed.

ADA guidelines are less strict for small businesses. However, owners are expected to make reasonable efforts to accommodate individuals with disabilities. That means if your facility prohibits animals, an exemption for service dogs is recommended. If it’s not too difficult or costly, physical barriers should be removed to best serve the public.

For businesses with larger resources, the “readily achievable” requirement takes a larger stand because these organizations can take a more active role. Also, the ADA recognizes the impact of economic factors such as profits. If profits go down, a reduction or delay in barrier removal can be accepted under the ADA.

In its 2010 Standards for Accessible Design, the United States Department of Justice called for the removal of architectural barriers to make facilities more accessible. Some of its requirements include adding curb cuts to sidewalks and entrances, arranging furniture so that there’s a clear path of travel, widening doors, and allowing enough room around toilet partitions to accommodate a wheelchair.

The regulations also cover factors such as entrance ramps and accessible parking in areas of public accommodation. Also, the ADA focuses on ensuring goods and services are available by changing display rack layouts, using more visible signage, or including Braille.

The ADA provides a safe harbor provision in its Title III regulations. It states that any facility elements built or altered before March 15, 2012 don’t have to be adapted to the 2010 standards if they comply with the standards that went into effect in 1991. However, residential facilities and dwelling units, amusement rides, golf facilities, play areas, and swimming pools aren’t covered by the provision.

What Are the Consequences of Noncompliance?

It is important to be ADA-compliant, as it not only improves accessibility and safety but also because it is looked upon carefully by the courts. Proving that barrier removal could not be readily achieved can be a challenge, as the court may see this argument as a weak defense. There are variables such as what is not readily achievable can be done later. Ambiguities in the statutory language can present challenges for any facility or government entity being sued.

The civil penalties for ADA-noncompliance were last adjusted in 2014. A business found to violate ADA Title III rules can face a civil penalty of as much as $75,000 for a first violation. The maximum is $150,000 for a subsequent violation.1 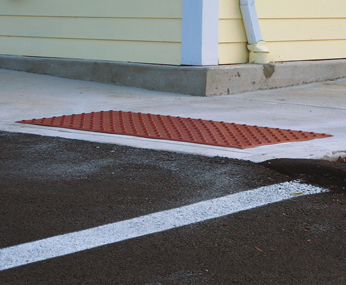 The ADA has provided a checklist for barrier removal to use as guidance. Some areas of compliance involve accessibility of public telephones, elevator call buttons and control panels, drinking fountains, self-service kiosks, and vending machines.

Regarding ADA safety, perhaps the most important consideration concerns detectable warning surfaces. These are required wherever there is a public right-of-way. Crosswalks, store entrances, walkways, and parking lots are just a few examples. The ADA provides specific regulations on the size and placement of these panels, as well as the width, height, and spacing of the truncated domes on them that allow people using canes, wheelchairs, and scooters to detect a transition in surfaces or where an area of high traffic is nearby.

Our products can help you comply with ADA regulations and local ordinances and laws. While the ADA doesn’t, some local jurisdictions require a specific color to be used. The ADA calls for a contrast of light and dark. If you’re looking to complete ADA compliant updates, we can help you with a variety of products, including replaceable panels and cast-in-place units. If you don’t have ADA-compliant pavers, you can retrofit your facility with surface-applied detectable warning systems. 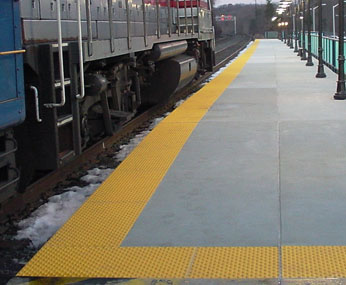 Whatever the needs of your public facility, ADA Solutions can provide the ADA-compliant tactile warning surfaces it needs to improve accessibility, safety, and compliance. Call 800-372-0519 to learn more or get a free quote.

Locations Where Tactile Surfaces Are Required
Scroll to top