Tactile paving refers to the panels, surface indicators, or detectable warning plates used near street crossings and on transportation platforms. A common form uses rows of truncated domes, arranged in a grid pattern, which can be felt under foot or by a wheelchair or cane. Other plates consist of rows of long narrow bars to help guide a visually impaired pedestrian on a certain path.

While tactile paving solutions have become more commonplace with modifications to Americans with Disabilities Act (ADA) guidelines, they are not new. Here is a look at the history of tactile warning systems and why they are so important.

Tactile pavers were developed by Seichi Miyake, who was inspired by Braille, and they were first introduced in 1965. They were installed for the first time in 1967 on a street in Okayama, Japan. They debuted at a single crosswalk near a school for the blind but were soon used at pedestrian crossings around the country. The technology proved to be such a success that Japan National Railways adopted it system wide. 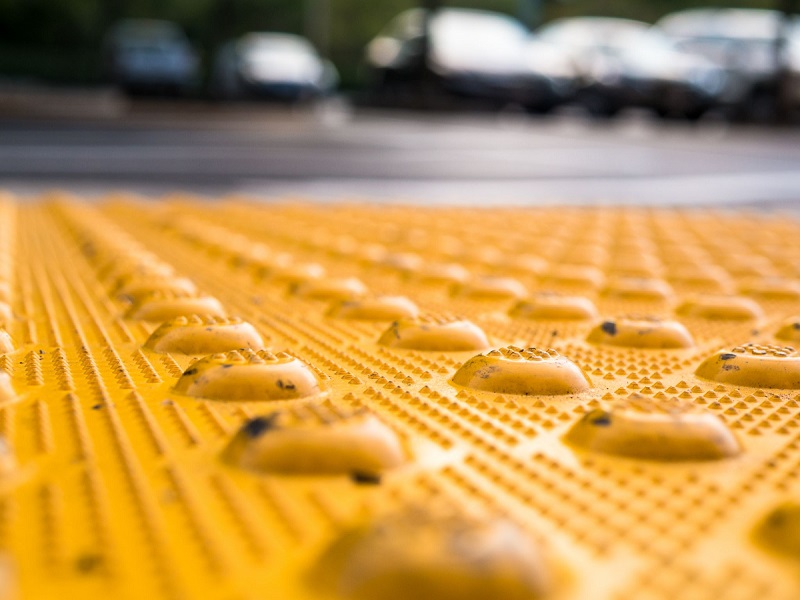 Tactile ground surface indicators began appearing elsewhere in the 1990s. The United States, UK, and Australia followed Japan’s lead in using them. Having been used in many Asian cities, they were installed at all Sydney Olympic Games facilities in 2000. By the early 2000s, Canada had integrated tactile paving systems into transportation and other developed areas.

Tactile Paving and the ADA

Currently, tactile paving is regulated in the U.S. It is mandated by the U.S. Access Board in places like train platforms and at the ends of sidewalks. The Board promotes accessible design and standards for the built environment that accommodate people who have disabilities. Businesses in the private and local government sector must follow ADA guidelines while the Architectural Barriers Act (ABA), passed in 1990, applies to properties built with federal funds or leased by federal agencies.

Why Are Tactile Pavers Important for the Visually Impaired?

The raised domes or bars communicate a message to visually impaired pedestrians about navigation. They mark transition points, so pedestrians are aware of where a safe route turns into a roadway, such as at a curb ramp. Tactile surfaces are also used to signal a person to take caution near stairways. 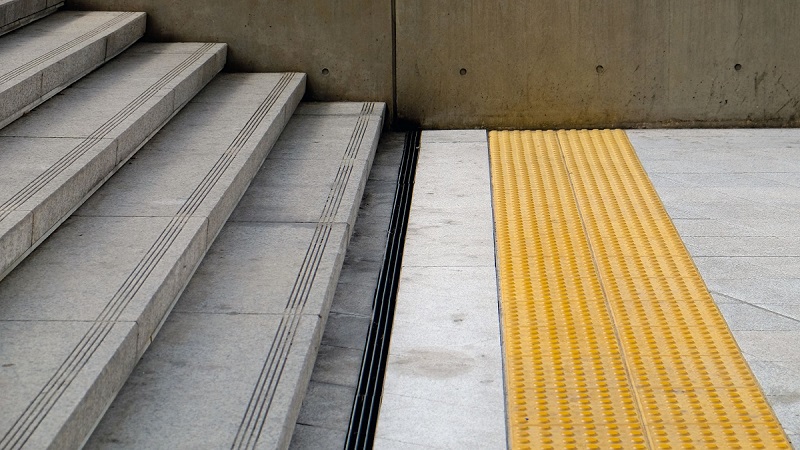 Partially sighted individuals benefit as well. While one might not see the difference in levels along a path, they can often see the bright or contrasting colors of the panels. Patterns of domes or grooves may be evident as well.

An important trait of warning plates is they are built of durable materials and often painted or powder coated. Cast iron plates oxidize into a coating that maintains a contrasting color. Tactile warning surfaces do not wear out so are well-suited for use in heavily traveled urban areas. 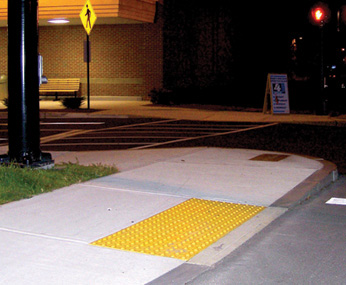 Our products feature 0.9” diameter, 0.2” high truncated domes with a center-to-center spacing of 2.35”. The panels are 0.25” thick (not including the domes), and they don’t use paint to achieve color stability. They’re also moisture- and chemical-resistant. ADA Solutions’ cast-in-place pavers and other tactile warning surface products comply with the ADA Accessibility Guidelines, Public Right-of-Way, and California Title 24 requirements and are approved by all major municipalities, state departments of transportation, and departments of public works.

Our cast-in-place tactile paving products meet all ADA guidelines pertaining to pedestrian safety. At ADA Solutions, we manufacture these and other warning surfaces at an ISO 9002 certified facility in Ohio. To learn more or request a free quote, call 800-372-0519 today.

Accessible Design for the Blind
Scroll to top