Since the 1900s, the way in which disability is perceived and treated has changed dramatically. For example, sidewalk truncated domes are now standard in cities, and those with disabilities now enjoy inclusive workplaces and communities. Join us as we take a look back at the history of disability rights.

The early 19th century saw new attempts at the resolution of disability with asylums and segregated schools. During this time, many institutions were established in both Europe and North America for individuals with blindness, deafness, and other physical and intellectual disabilities.

Disabilities were also better able to be treated during this time, thanks to the development of the differential diagnosis. New methods of education and interventions for treatment were also devised during this century.

1918 was the year that Congress passed a rehabilitation program for soldiers, due to the large numbers of WW1 veterans who returned from the war disabled. The rehabilitation program was the first of its kind. One year later, the Ohio Society for Crippled Children, which would become the Easter Seals organization, was founded.

The 1920s would see contrasting developments occurring in the realm of disability rights. In 1925, Samuel Orton began an extensive study of dyslexia, based on his hypothesis that the condition might be neurological and not visual.

An unfortunate development occurred in 1925 when it was ruled by the Supreme Court that the compulsory sterilization of those with mental illness was constitutional, albeit under careful state safeguards. It may come as a great surprise to many that this ruling has yet to be overturned.

In 1925, the respiratory muscle paralysis experienced by those with polio would soon be able to be treated with that year’s invention of the iron lung, which provided artificial respiration.

In 1932, Franklin D. Roosevelt, who suffered from polio, would become America’s 32nd president. Soon after, he would help to found the National Foundation for Infantile Paralysis, which is now known as the March of Dimes. The California Council for the Blind would be formed in 1934 and, the next year, Roosevelt would sign the Social Security Act, which would begin providing permanent assistance to disabled adults.

Rosemary Kennedy would undergo a failed lobotomy in 1941, after which she would be moved to a Wisconsin school for exceptional children. Rosemary’s sister Eunice Kennedy Shriver would later found the Special Olympics in her honor.

New York City’s Dr. Howard A. Rusk would found the Rusk Institute of Rehabilitation Medicine in 1948. His theories would become the basis for all types of rehabilitation medicine and address the social, psychological, and emotional aspects of living with disabilities.

This decade would see the beginning of the “barrier-free movement” by a combined force of disabled veterans and individuals, along with organizations such as the National Easter Seals Society and the Veterans Administration. As a result of their combined efforts, national standards for barrier-free buildings and safer walkways with truncated domes would eventually be developed. 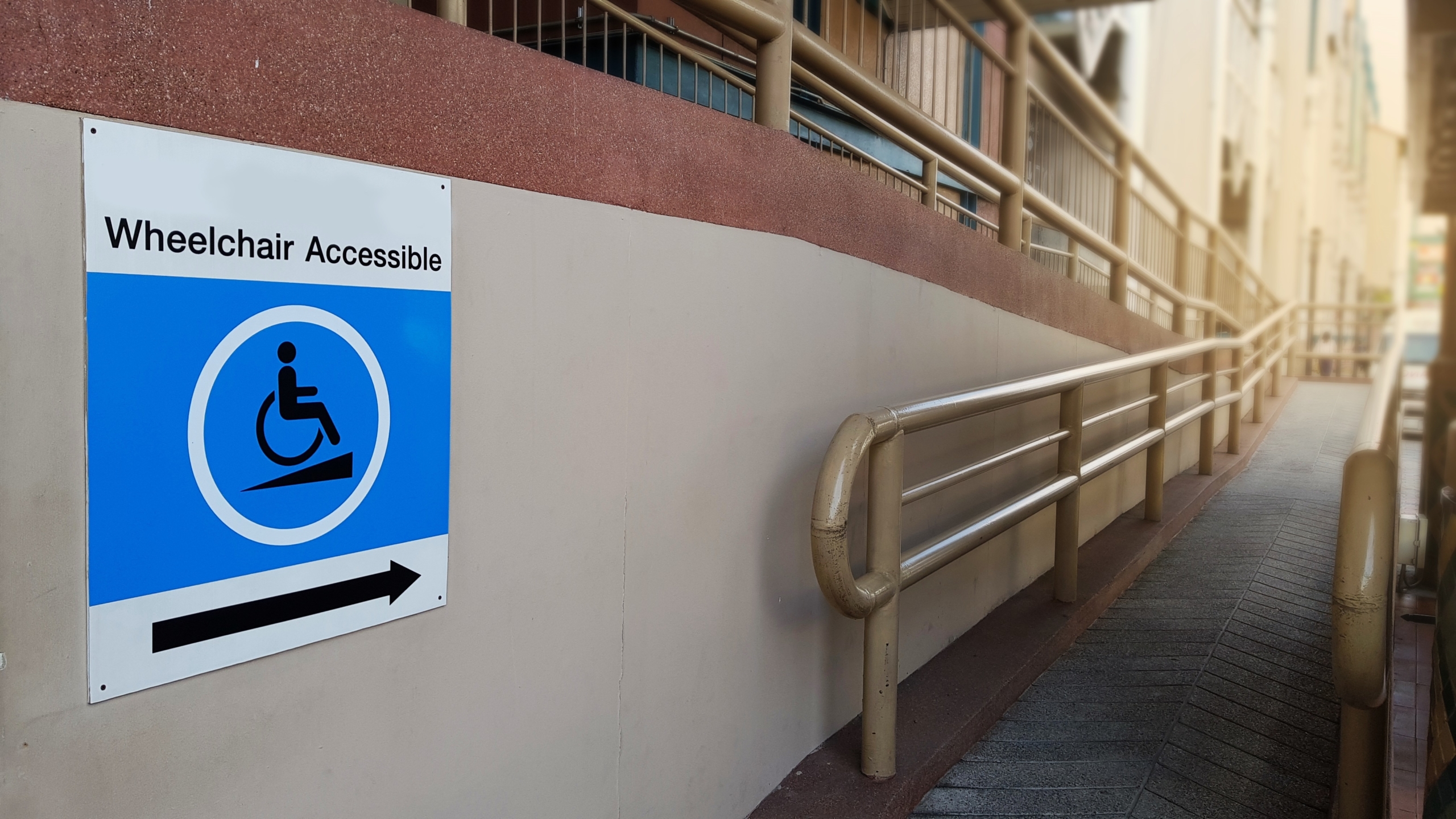 The 1960s would prove to be a dynamic and intense time for the disabled. The accessibility and usability of buildings would be in the spotlight in 1961 when the first accessibility standard would be published. By 1973, accessibility legislation would be adopted by 49 states.

A young Ed Roberts, who suffered from polio, was denied admission into the University of California, Berkeley in 1962. He would fight this decision and become the first person to be enrolled. The efforts of Roberts and other disabled students would result in the formation of the Independent Living Movement and the establishment of the first Center for Independent Living.

In 1963, an act would pass that would see money set aside for the development of councils, protection, advocacy, and university centers for all with disabilities. Two years later, Medicaid would be created. The Architectural Barriers act of 1968 would mandate that all buildings be made accessible to those with disabilities.

Wheelchair-bound Judy Heumann would file and settle a lawsuit in 1971 because of being denied a teaching license by New York City’s Board of Education. She would then become an activist and later found the Independent Living Movement with Ed Roberts. Also that year, Section 504 of the Rehabilitation Act of 1973 would make it illegal for any federally funded public institution to discriminate based on disability.

In 1974, the first convention for the national organization People First would be held in Oregon. That same year, the last law which allowed police to arrest and place in jail anyone demonstrating an apparent disability, also called an “ugly law,” was repealed in Chicago.

The final years of the 70s would see protests by disability demonstrators, the development of the Education Fest for disabled Hispanic children, and the establishment of the National Council on Disability.

The first three years of the 1980s would include the Department of Justice being given the power to sue any residential or treatment institutions that violated the rights of disabled persons in their care.

Also at this time, global equality and full participation of disabled persons would be encouraged by the UN, the National Organization on Disability would be founded, and a national campaign would begin to make public transportation accessible. This would lead to accessible housing being mandated and a new act that would prohibit air carriers from discrimination against disability.

President George H. W. Bush would sign the Americans with Disabilities Act into law in 1990. It would bring together all disability supporters, advocates, and organizations together for the benefit of disabled persons. It would also mandate the use of ADA truncated domes for easy detection of approach to hazardous locations. 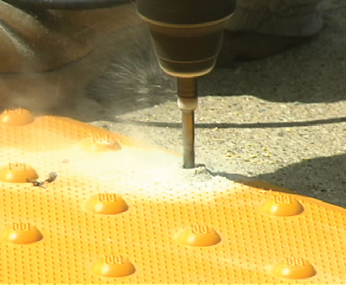 1996 would see the Telecommunications Act being passed. The act would require all telecommunication devices to be equipped with accessibility features. In 1998, a federal judge would rule that professional golfer Casey Martin had the right to use a golf cart in PGA Tournaments due to his rare circulatory disorder.

In 1999,  the availability of Medicare and Medicaid for disabled beneficiaries would be expanded by the Ticket to Work and Work Incentives Improvements Act.  It would also be ruled that individuals have the right to receive benefits, and that it would be illegal discrimination to fail to find community-based placements for qualifying individuals with disabilities.

2001 saw detectable warnings for curb cuts becoming officially required. The New Freedom Commission on Mental Health would be established in 2002. The Special Olympics Sport and Empowerment Act would authorize funding and education for its athletes. California voters would pass Proposition 63, which would provide a wide range of services for those with severe mental illness.

In 2005, Terri Schiavo, who was in an irreversible persistent vegetative state for seven years prior, would have her feeding tube ordered removed and ultimately pass away that year. In 2006, mental health parity would be achieved with the passing of Timothy’s Law.

2006 to 2010 saw the extension of the Americans with Disabilities Act to include those in state prisons and saw mental health facilities being held accountable under Jonathan’s Law. The Individuals with Disabilities Education Act would require free and appropriate education for all students with disabilities, and the Genetic Information Nondiscrimination Act would become law. The Christopher and Dana Reeves Paralysis Act would also become law, and the reference “intellectual disability” would replace “mental retardation.”

2011’s passing of the new Americans with Disabilities Act would greatly expand requirements for accessibility and set new standards for mobility devices, ticket sales, and service animals, to name a very few. Many lawsuits and protests in the following years would lead to further confirmation, expansion, and enforcement of rights for those with disabilities that continue to this day.

ADA Solutions is a leading manufacturer of truncated dome mats and other tactile warning surface tiles. Call 1-800-372-0519 to learn more about the benefits of our competitively priced products and request your free quote.

7 Ways to Make Sure Your Business Is ADA Compliant

ADA Non-Compliance: What Happens When Cities or Businesses Do Not Comply?
Scroll to top