Detectable warning surfaces provide a valuable service for those individuals with visual impairments. They essentially serve as a warning that requires their attention ahead, such as entering a busy intersection, a rail platform dropoff, and so on. In addition, these warning surfaces alert non-visually impaired, yet distracted individuals of the same warnings.

According to the Americans with Disabilities Act (ADA), detectable warning surfaces are defined as a distinct surface with a pattern of raised domes that can easily be detected by the use of a cane or feet and serve to alert people of their approach to hazardous locations.1 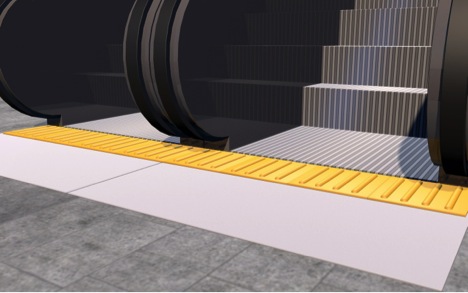 Reasons Why There Are ADA Requirements

The ADA was initialed passed in 1990. The Act affords similar protections for those individuals with disabilities as found under the Civil Rights Act. There are several Title areas of the Act that relate to:

In regards to the requirements for detectable warning surfaces, Title II and Title III contain the information regarding the use of tactile warning surfaces. Title II focuses primarily on curbs, curb ramps, intersections, and other public areas where these surfaces are required. Title III focuses on altered/renovated or newly constructed places of public accommodations and commercial facilities.

Since the ADA was initially passed, there have been several updates to the regulatory compliances required for tactile warning surfaces. The most recent one was in 2010. It is the responsibility of facility managers, project managers, and others to ensure any existing, renovated or new construction meets the latest ADA requirements. 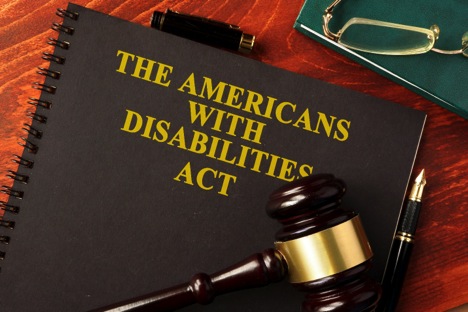 Warning surfaces have gone through several generations since the ADA was first passed. Over the years, advancements have been made to ensure the truncated domes on the raised warning surfaces are durable and last a long time.

The first generation solution was to simply stamp or score the concrete to create the elevated surfaces. It was a low-cost solution for contractors and builders since they only had to pour a new section of concrete in the required areas.

However, one major problem was that the concrete domes wore away quickly and could not easily be distinguished between cracks in the pavement and a warning surface. The use of this type of warning surface is not ADA-compliant under the current guidelines.

The second generation aimed to make improvements to warning surfaces by using bricks with raised domes. While the concept was much better than the first generation, there were still some issues with bricks. 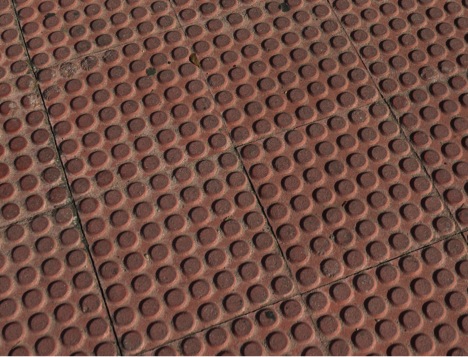 One reason bricks were not very successful is that the domes would wear off from being constantly walked on and from exposure to the elements. Furthermore, the bricks could become uneven, if not installed correctly, and create a slip, trip, and fall hazard. As such, truncated domed bricks are no longer allowed under the current ADA guidelines.

The third generation saw the introduction of surface-applied rubber and plastic domed solutions. These offered a better solution over the previous generations because they could be applied directly over an existing surface.

Contractors and construction workers no longer had to tear out sidewalks or other areas where truncated domes were required by the ADA. One concern when this solution first came out was the quality of the rubber and plastic materials used. They did not stand up to changes in temperatures, direct exposure to UV sunlight, and heavy foot traffic.

Yet one major change was the ability to create warning surfaces in a variety of colors, from yellow and red to blue and gray. Unfortunately, even with color options, the rubber or plastic would rip, tear, fade, and crack.

Whenever this occurred, the old one had to be completed removed and a new one installed. This led to ongoing maintenance in areas where these solutions were being used. In addition, they were not always installed in the exact location as required by the ADA.

Today, the ADA still does allow surface applied warning surfaces. However, they must be made from quality and durable materials. For instance, ADA Solutions surface-applied solutions are constructed of an exterior grade, high-quality fiberglass polymer composite material which is durable, weather resistant, and slip resistant.

The fourth generation saw the introduction of concrete inserts. This was a marked improvement over the original stamped or scored concrete. However, these inserts had similar problems to those truncated domes made from brick. The dome would wear off, the inserts could crack, and they were not designed for heavy foot traffic.

These initial concrete inserts are no longer ADA compliant. Rather, there is a different type of concrete insert that addresses the previous concerns and problems, which the ADA does allow, although they can still be prone to weathering.

The fifth generation built upon the concept of using inserts and plastic-based materials. These new plastic inserts are commonly referred to as “Cast-in-Place” because they are set directly into the concrete while it is still wet.

The quality of the plastic materials was superior to concrete inserts. In addition, there is a variety of color options one can choose from when color is not mandated by state or local ordinances. The color of the insert resists fading from UV sunlight and is not prone to weathering like concrete.

The sixth generation saw new detectable warning surfaces being made from various metals, most often steel. The problem with steel warning surfaces is they had to be coated because you cannot color steel throughout. Even though steel is very durable, if the coating comes off, it leaves exposed steel that will rust and which could bleed into the pavement.

Metal inserts are still allowed under the ADA guidelines, so long as they meet the light-on-dark or dark-on-light requirement, as well as any state or local ordinances. 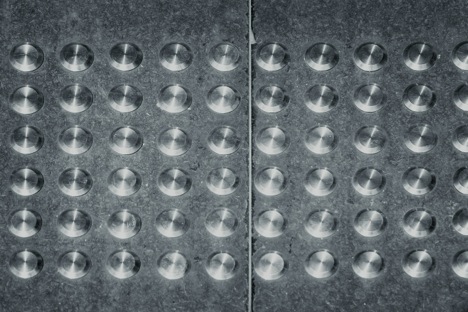 The latest generation of tactile systems includes several new products and solutions. Building upon the success of our high-quality surface applied products, we introduced our “Cast-in-Place Replaceable” panels in 2006. These panels have been a huge success and game changer and, so far, we have installed over 18 million square feet of our replaceable panel systems.

The replaceable feature makes it easy to swap out panels without having to tear up the concrete. Rather, the upper portion of the panel is removable and a new one can be installed in its place. This style is also popular when graphic tile systems are used as part of the warning surface.

Graphic tiles are a great way to incorporate images, logos, brands, or text messages into the ground. For instance, railway platforms could add text that says “Stand Back” or “Wait for Doors to Open before Boarding.”

Another type of product that we recently developed is our cast iron warning surface. The surfaces are made of durable cast iron and do not require coatings like steel and other metal warning surfaces. Since the dark cask iron color is consistent throughout, it maintains its appearance with its natural, unfinished state.

Radius systems are also another solution that we have brought to market in more recent years. This system transforms the traditional square or rectangular warning surfaces into arched and curved designs. This solution is perfect for corners at busy intersections or other areas where a curved or arch pattern is desired.

Last, this generation has seen the introduction of our Glow-Dome™ panels. These panels illuminate in lower light conditions to help provide non-visually impaired individuals with a distinct visual warning, as well as help guide them to emergency exits. 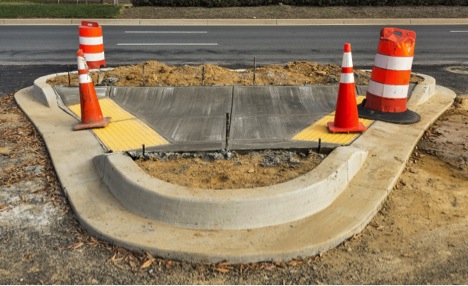 As you can see, detectable tactile warning surfaces have evolved quite a bit since 1990. Today you have numerous options to choose from that best suit your needs, from surface applied to cast-in-place and replaceable panels.

To learn more about our tactile dome systems and solutions or assistance in selecting the right warning surface products for your project, sidewalk, building, or another area, please feel free to contact ADA Solutions at (800) 372-0519 today!