The use of detectable warning surfaces in transit facilities makes access by those with visual impairments and disabilities much easier. The tactile warning surfaces help provide guidance to the appropriate platform, while at the same time serve as a warning. The raised domes on the tiles indicate caution should be used and could signify encountering platform drop-offs, entering hazardous areas, or approaching the curb of a busy intersection.

The tactile warning surfaces even help people without visual impairments. For example, a person is reading a text message on their smartphone while walking toward the train platform. If there were not any warning surfaces along the edge, the person would walk right off and onto the tracks. Thanks to warning surfaces, the person feels the change in the surface and, hopefully, looks up to see they are at the edge of the platform.

Additionally, the use of truncated domes on warning surfaces helps people find their way in lower and reduced light levels. When combined with special illuminating photoluminescent warning surface systems, the panels light up to help guide people.

Where and When Are Detectable Warning Surfaces Required?

The Americans with Disabilities Act (ADA) is a civil law that was passed in 1990 and signed into law by President Bush. The law details a wide range of disability standards and requirements and provides protections for those with disabilities. One particular section of the ADA refers to the use of detectable warning surfaces.

The ADA is just one set of requirements which one must consider. The United States Department of Transportation (USDOT) and the United States Access Board also release requirement standards which can vary from the ADA but must be followed.

Since the ADA was passed, there have been a few updates to it. The ADA was updated in 2001 and again in 2010. Both the USDOT and U.S. Access Board have also made updates to requirements and guidelines for use of tactile warning surfaces in transit facilities and public areas.

Which Requirements and Guidelines Should Be Used When Designing or Renovating a Facility?

In addition to the federal requirements for the use of tactile warning surfaces, each city, county, and state can have their own specific requirements. When designing or renovating a public transit facility, it is important to refer to your local and state requirements and compare these to the specific ADASTF and ADASAD requirements.

When comparing the ADASTF and ADASAD, you will notice there are a few differences between the two. The ADASTF includes four specific modifications in regards to:

Furthermore, the U.S. Access Board created and issued guidelines for making public areas accessible to help bridge the gap between the ADA standards and the ADASTF and ADASAD requirements. These guidelines are known as PROWAG (Public Rights of Way Accessibility Guidelines). There were initially released in 2005 with updates in 2011.3

While the PROWAG is not considered enforceable under the law, it does provide guidance in areas where the ADA standards, ADASTF, and ADASAD do not address a specific issue or concern. In other words, the PROWAG helps facilities design and plan renovations which are considered safe practices for accessible right of ways for people with disabilities. 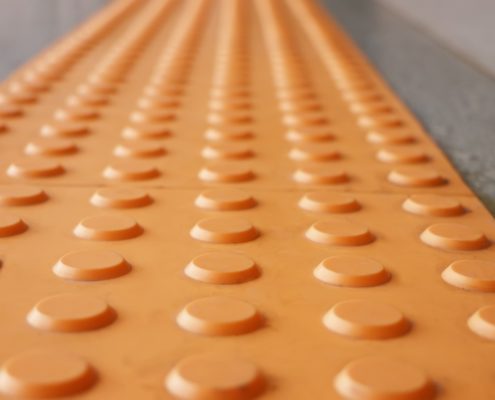 If Requirements and Guidelines Are Updated Does a Facility Also Have to Update?

When a transit facility is first built, it must adhere to the current state, local, ADA, ADASTF, and ADASAD requirements, as well as take into consideration PROWAG guidelines. For instance, a new public transportation facility is constructed in 2006. This facility would be required to adhere to all updates as of 2006 to ensure accessibility compliance.

In 2016, a renovation and addition to the facility were planned. Any new additions to the facility, as well as areas being renovated, would then fall under the latest and most recent ADA, ADASTF, ADASAD requirements. The planned renovations should also take into account the current PROWAG guidelines. However, any areas of the facility not being renovated would not have to be updated to the current standards and recommendations.

Are the Requirements and Guidelines the Same for Bus and Rail Transit Systems?

There can be differences between the requirements for bus and rail transit systems. Bus stations can be required to have accessible boarding and alighting areas. These could include the use of non-slip surfaces, truncated domes, benches, shelters, and other accessibility accommodations. Yet, along bus routes, the used of warning surfaces may fall to the city or those responsible for the sidewalks at each bus stop.

The use of detectable warning surfaces is required on any platform area of rail transit systems to indicate where the edge of the platform is located. Normally, the raised warning surface is set back several feet from the edge, so it allows people with visual impairments sufficient time to stop.

Additionally, rail stations may use a combination of warning surfaces with truncated domes and way-finding ridges to help visually impaired people find an accessible path they can follow to board trains more easily. Some rail stations will also use warning surfaces on the edge of stairwells to indicate a drop-off, as well as on each stair so visually impaired people can tell where the drop off is for each step.

What Are the Requirements for Airports and Cruise Terminals?

Both airports and cruise terminals are also considered transit facilities. Airports will follow the appropriate local, state, and federal requirements, as well as PROWAG guidelines. Cruise terminals must use similar methods for ensuring compliance and the safety of passengers embarking and disembarking their vessels.

Are Transit Facilities Required to Use a Specific Color of Detectable Warning Surfaces?

The federal ADA standards allow transit facilities the freedom to choose any color of detectable warning surfaces they want to use, although the color selected must be a contrasting color to the color of the floor within the facility or on the transit platform. 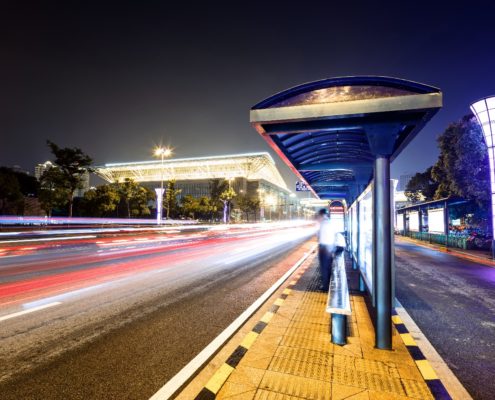 Which Types of Detectable Warning Surfaces Are Best?

There are many different types of materials used to make detectable warning surfaces, including rubber, plastic, polymer, cast iron, fiberglass, carbon, and other composite materials. Ideally, you should look for the best-quality panels since they will last the longest and not need to be replaced as often.

For instance, rubber and plastic tactile warning surfaces can quickly wear out and get damaged, with pieces of the panel ripping off. Not only is the warning surface no longer effective, it has also become a safety hazard, as someone could more easily trip and get injured.

Transit facilities should consider using high-quality solid panels, as these are much more durable. To make replacement easier without having to tear up the platform, curb, or other location when panels are used, it is highly recommended to use cast-in-place panels.

Cast-in-place panels are anchored in place using bolts. If the panel wears out from heavy foot traffic or cracks or breaks for some reason, then a new panel can be installed by simply removing the bolts from the existing panel. The existing panel is then removed and a new one is set in place and re-secured with the same bolts and anchors.

For assistance in finding and selecting the best detectable warning surfaces to meet federal, state, and local requirements and guidelines for transit facilities, please feel free to contact ADA Solutions at (800) 372-0519 today!

Who Benefits When Public Spaces Are Made Accessible to Everyone?

The Importance of Tactile Warnings
Scroll to top